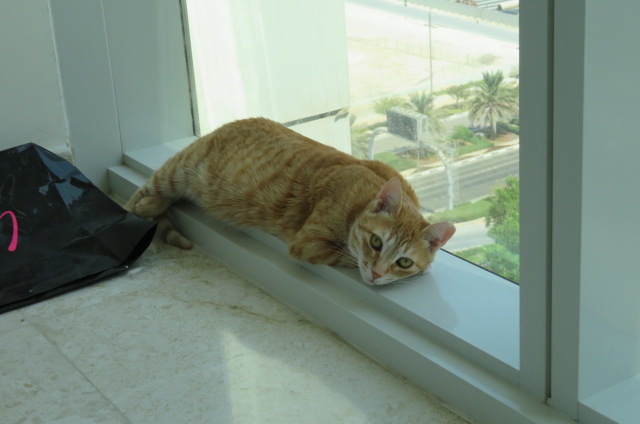 In the next few weeks, I’ll be introducing you to all five cats that helped to inspire characters for my book. First up is Holly, who inspired the narrator Hazel.

Holly is the inspiration for a Wondercat. But, even without superpowers, she’s already a hero. A few years ago, she saved the life of a young kitten (although not necessarily by her own choice)…

The street cat with no name

Holly holds a special place in my heart. She was the first cat I adopted while living and working overseas at a veterinary hospital in the United Arab Emirates.

At the time I wasn’t planning to adopt any cats… but, you probably know how that goes. Sometimes, they adopt you.

I wasn’t yet sure how long I would be in the country, and I worried about the difficulty of bringing pets with me if and when I moved back to the US.

It’s possible to bring pets back — in fact, it’s done very commonly. But, it’s a hassle, considering that the journey is usually about 24 hours on planes and in airports!

But, as I reported to work each day, there was a lovely orange cat (or ginger, if you go by the UK description of the color) that hung around outside our clinic.

She ate the food we left out for the local strays (several of whom had made a permanent home in the little cul de sac outside our clinic), and also begged for scraps from construction workers who ate their lunches nearby. She slept in our flower pots. She sought shelter underneath of parked cars on hot days. And, she nuzzled and meowed whenever anybody walked by.

One day, she even followed me to my car. It was late and I was going home for the evening. She followed me, meowing in her sweet-toned, squeaky voice.

I stooped down to pet her, and felt bad about leaving her. But, there were so many strays in the city, some feral but many extremely docile and friendly, and it certainly wasn’t possible to take in all of them.

Most of the street cats in the UAE are Arabian Maus, but there are a handful of domestic shorthairs, too. I believe Holly (who didn’t have a name yet, at that time) is a combination of both.

If you’re not familiar with Arabian Maus, they look a bit like domestic shorthairs (the typical house cat you see in the US), but they are very thin with longer legs and ears, adapted to desert life. They come in a variety of colors, especially in spotted, calico, and tabby patterns.

They tend to be very vocal, and Holly was no exception. She continued to meow and meow while I petted her, and she rubbed against my legs.

As I got up to continue toward my car, she followed me, meowing louder. I tried to coax her away, because even though we were on a side street, I didn’t want to encourage her to get that close to cars.

She stayed a short distance away, but after I got inside and closed the door, I heard tiny paws on my roof. Then I saw her on my windshield, looking in at me and continuing to meow.

I revved the engine to frighten her away, feeling a bit guilty about doing that, but of course putting her safety as a priority as I needed to drive away and didn’t want her to get hurt. She scampered away, and waited outside of our clinic door for anyone else who might be coming out.

I thought about her that night, hoping she was safe…

Then, just a couple days before Christmas, she became a hero…

A deadly disease, and a hero cat

When I worked in the Middle East, we saw a lot of cats infected with a disease called Mycoplasma. It’s an infection carried by fleas and ticks, which causes cats to spike a very high fever and feel really awful.

Sometimes this happens so rapidly that the anemia is life-threatening.

It’s possible to treat the disease, with antibiotics for the infection and steroids to stop the red blood cell destruction… but, those things take time to work. When faced with a life-threatening anemia, you don’t have time to wait…

And that’s exactly the situation we faced with a young kitten who came into our clinic. For the sake of this blog, let’s call her "Lucky."

Lucky was jaundiced, dehydrated, dangerously anemic, and nearly comatose because of the anemia. It was clear that Lucky needed a blood transfusion if she was going to survive the night… or even the next few hours.

Unfortunately, it was toward the end of the clinic day. I think it may have been right before the weekend, too. We called some of our regular clients who love cats and own cats that are healthy and a large size, to see if they would be interested in their cat being a blood donor. With the odd hour, not too many people picked up their phones.

We were running out of options…

Then, someone suggested the friendly ginger street cat who lived outside the clinic. While a bit on the petite side, she certainly seemed healthy.

However, despite her friendly nature, she became feisty when we tried to do things like take her temperature or draw blood. She screamed like a banshee, and became a tornado of claws. She still does that to this day (she requires sedation for most of her veterinary exams… and you’ll never want to attempt to trim her toenails, or she’ll turn into the Tasmanian devil!)

But, she needed sedation for a blood transfusion anyways, since it’s a larger amount of blood that will be taken. So we gave her an injectable sedative that let her fall into a gentle sleep.

Working fast to save the kitten

For a blood transfusion, there are a few things we have to check…

First and foremost, we check for infectious diseases… after all, it wouldn’t do the kitten much good to receive a transfusion with blood that contains the FIV or feline leukemia viruses. Fortunately, our donor cat was negative.

Next, we check that the donor cat is not anemic, and has normal blood cell counts and blood chemistry values. If the donor cat were anemic or suffering from liver or kidney disease, it wouldn’t be fair to take their blood, because the adverse effects on their health would be too much for them to go through.

Again, the donor cat was normal.

And finally, in an ideal world, we would check blood type. Cats only have two blood types, and one is much, much more common than the other. However, if you give the wrong blood type in a transfusion… the result can be a huge immune system reaction that leads to death.

As I mentioned, this is done in an ideal world…

But, at our location overseas, we didn’t have the proper equipment to test blood types that night, and it could take a long time to get it imported. We even called other local hospitals, and they didn’t have it in stock either…

So, as the unconscious kitten slipped away more and more, we made the decision to proceed. The odds of having the wrong blood type were minimal… and the kitten would die for sure without the transfusion. She would probably die in the next hour or two. At least with the transfusion, she had a fighting chance.

I mentioned that Holly was a hero… so you can probably guess how the story turned out.

In this case, Lucky the kitten truly was lucky! She survived and thrived. After a couple of weeks in the hospital, she was back to normal — even a bit on the feisty side — and was released back to her mom and siblings.

We continued to see the cat's caretaker from time to time as Lucky grew into an adult — and she always reported that Lucky was doing great!

But back to the night of the transfusion…

Holly — who didn’t have a name at that point — woke up from her sedation all purrs and cuddles. We offered her canned food — and I don’t think I’ve ever seen a cat so excited to receive it! She was happy about anything and everything, rather than upset about being recently sedated and kept in a kennel.

She was so sweet, and so seemingly happy to be indoors, that I decided I couldn’t let her go back out on the streets…

We kept her in the hospital for a couple of days, to be sure she was alright. Then, on Christmas day, when our hospital was closed, I came and picked her up, and took her home to my apartment.

And that’s how she got the name Holly — because she was adopted on Christmas day.

Now, Holly does well as a house cat. Always friendly, still meowing and talkative, and always wanting to be the center of attention. She stills enjoys looking out the window at birds and squirrels — and she sees a lot more of them in the US than she ever did from my 13th-story apartment window in the UAE.

And by the way, if you’re interested in how I brought her home with me, check out her blog post about her big adventure with her sister Luna. 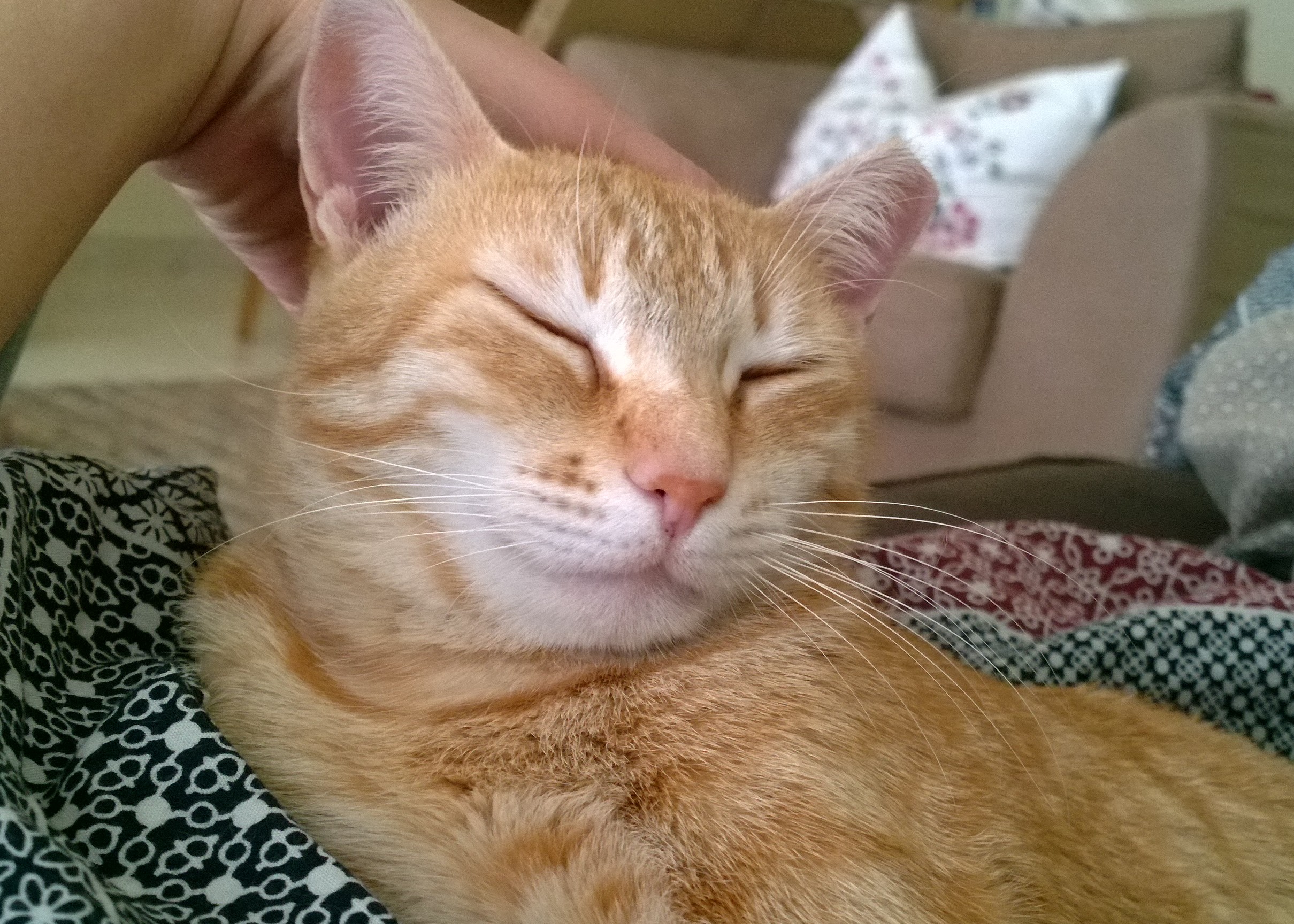 Making Holly into a Wondercat

For the book, I renamed Holly as Hazel. It just seemed to fit.

Also, I changed her color from orange tabby, to tortoiseshell black and orange. The reason is, orange female cats are very rare in the US. In fact, prior to the UAE, I had never seen one — all the orange cats I saw were males.

On the other hand, they are very common in the UAE. I think it’s part of the Arabian Mau genes.

However, I thought that for my fellow cat lovers in the US who had never seen an orange female — it might immediately ring as strange and untrue (even though it’s the truth). Plus, I thought it would be good to change up all of the cats’ appearances a little bit, so I’m freer to write fiction and not too tempted to make the book into a factual cat memoir.

Plus, if you know tortoiseshells, then you probably know they tend to be a bit feisty — and that fits Holly/Hazel perfectly.

In the book, she likes being in charge — just like the real-life Holly. But, she’ll learn to get along with her housemates, put others first, show some humility, and find joy in sharing rather than having the scarcity mentality of a former street cat.

And, she’ll have a key role to play in rescuing the family baby from kidnappers.

Hazel will start telling you her story in the near future. In the meantime, I'll introduce you to the other Wondercats (and their real-life inspirations) soon!