Meet Luna: Unconditional love wrapped up in a bundle of fluff 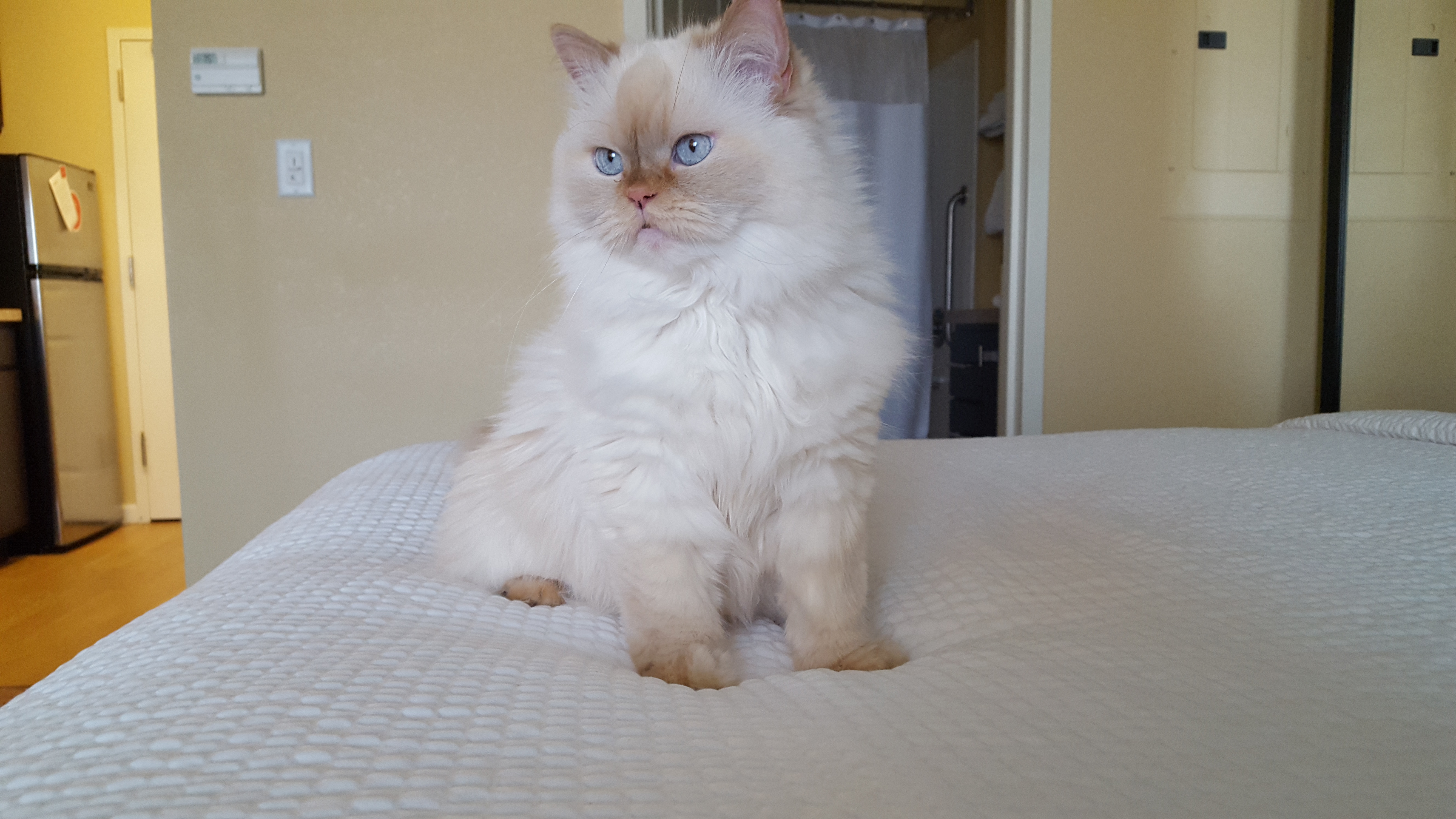 Recently you met Holly, the inspiration for the main character of my Wondercats book. Now, meet her sister Luna.

Luna is another addition from my time working overseas in the United Arab Emirates — you know, the time when I “wasn’t going to adopt any cats” (but somehow ended up with two!)

Early one morning, I arrived for work at our clinic, and there was a new addition in the treatment area. A beautiful, flame-point Himalayan, who had some bleeding from her mouth.

Apparently, she had been left outside our clinic overnight in a carrier, with a note that said “Injured.”

Despite a sore mouth, she was all fluffy fur and cuddles… she was one of the most adorable things I’ve ever seen, and it was hard to even concentrate on examining her. Quite the opposite of Holly, she just purred and stretched and kneaded during her exam.

She had no microchip, and no other form of identification. And she appeared healthy other than the injury in her mouth — a bleeding ulcer on her upper lips, and a couple of missing incisors.

I liked this cat right away… in fact, I liked her a lot. She reminded me of my old cat Sadie, whom I had adopted from our surgery lab in vet school, but who had died young of lymphoma secondary to feline leukemia virus (although she still outlived her prognosis by five years longer than the internal medicine specialists had predicted!)

Just like Sadie, this new cat was sweet tempered, with long fluffy fur and beautiful blue eyes. Immediately, I felt like she was right for me. But I was worried about Holly accepting her (at this point, Holly had been in my apartment for about 10 months).

But, I knew I had to give it a try. So I named her Luna and I took her home. And the result was interesting…

A triumph of peace, love, and non-resistance

At first, I was right… Holly was none too happy.

I tried to keep them in separate rooms at first, with Luna closed in the bedroom, but that was a no-go. They both clawed at the door incessantly, until I gave up and just left it open to see what would happen.

As expected, Holly hissed and growled and complained. But, Luna didn’t reciprocate. In fact, she just sat there, in a friendly stance in cat language (ears forward and tail up) and looked adorable.

Holly tried hissing again… and she was again met with only calm and innocent friendliness in return.

They went through this cycle a few times, at which point Holly seemed to pretty much shrug her shoulders, say “maybe you’re not so bad,” and proceed to sniff Luna and try to play with her.

It was the quickest and least dramatic cat introduction I’ve ever seen. All because Luna was a lover and not a fighter. And she met Holly’s intimidation attempts with nothing but an adorably open friendliness.

From then on, they remained close friends, at least until we moved into a house with more cats and they drifted apart as they made new feline alliances… But for the rest of our time in the UAE, they were the best of buddies.

Over time, Luna’s lip healed with medication and a special, hypoallergenic diet (there may have been an injury that initiated the ulcer, but a large part of it was based on food allergies, too). And, her friendliness remains just as strong as ever nearly four years later.

She likes to lay in the hallway on her back, belly exposed, four paws stretched out in superman pose — just waiting for somebody to walk by and rub her belly.

She likes to groom people — often licking my hand or even my face for a while, and even pulling my hand back if I try to take it away before she’s finished.

And, there’s nothing like being greeted by that little ball of fur first thing in the morning, or after returning home from work — her fluffiness, and cuddliness, and her super loud purring are some of the best natural stress busters a person could ask for. It’s like her peaceful vibe just radiates out to whomever she chooses to cuddle with. 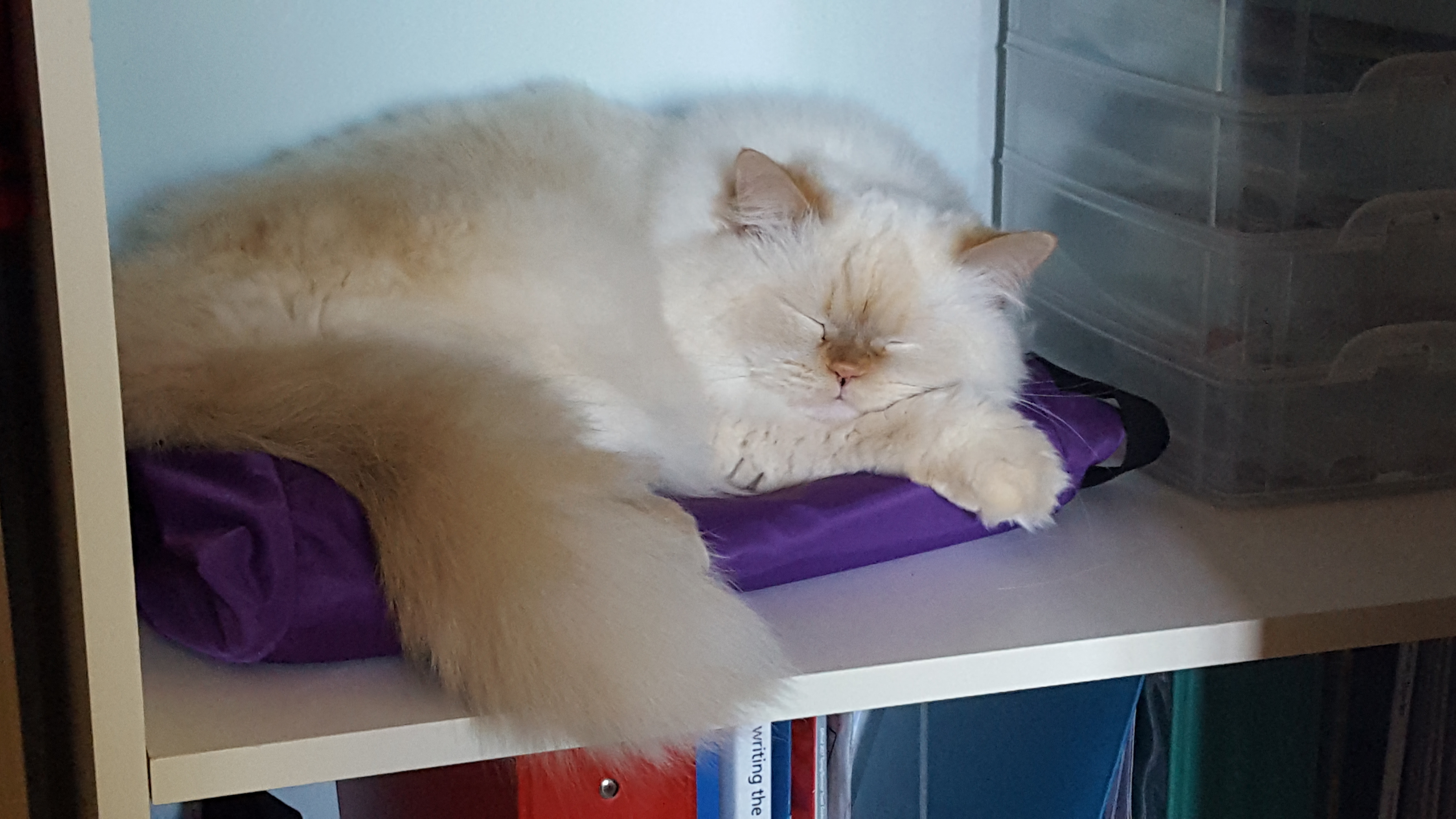 Making Luna into a Wondercat

In the book, the character Snowball is based on Luna. She shares Luna’s beautiful long fur, and blue eyes. But, she’s more of a domestic long hair, all white, and without the squished nose and flame-point markings.

Snowball is a bit gullible — but that’s only because she’s so loving and trusting, and really wants to be everyone’s friend. She doesn’t like conflict, and isn’t willing to stand up for herself, even if another cat in the house treats her unfairly. But, throughout the adventure, she’ll learn her worth, and start to stand up for herself.

And in real life, that’s not so much of a stretch — because as loving as Luna is, she will stand up for herself if another cat annoys her and pushes her boundaries (such as tackling her while playing). But, her default mode is always peace and love.

And that’s the role for Snowball — the character that provides a viewpoint of tenderness, sweetness, and an innocent and hopeful heart.