Meet Cowboy: Little cat, big attitude… and the best friend a person could ask for 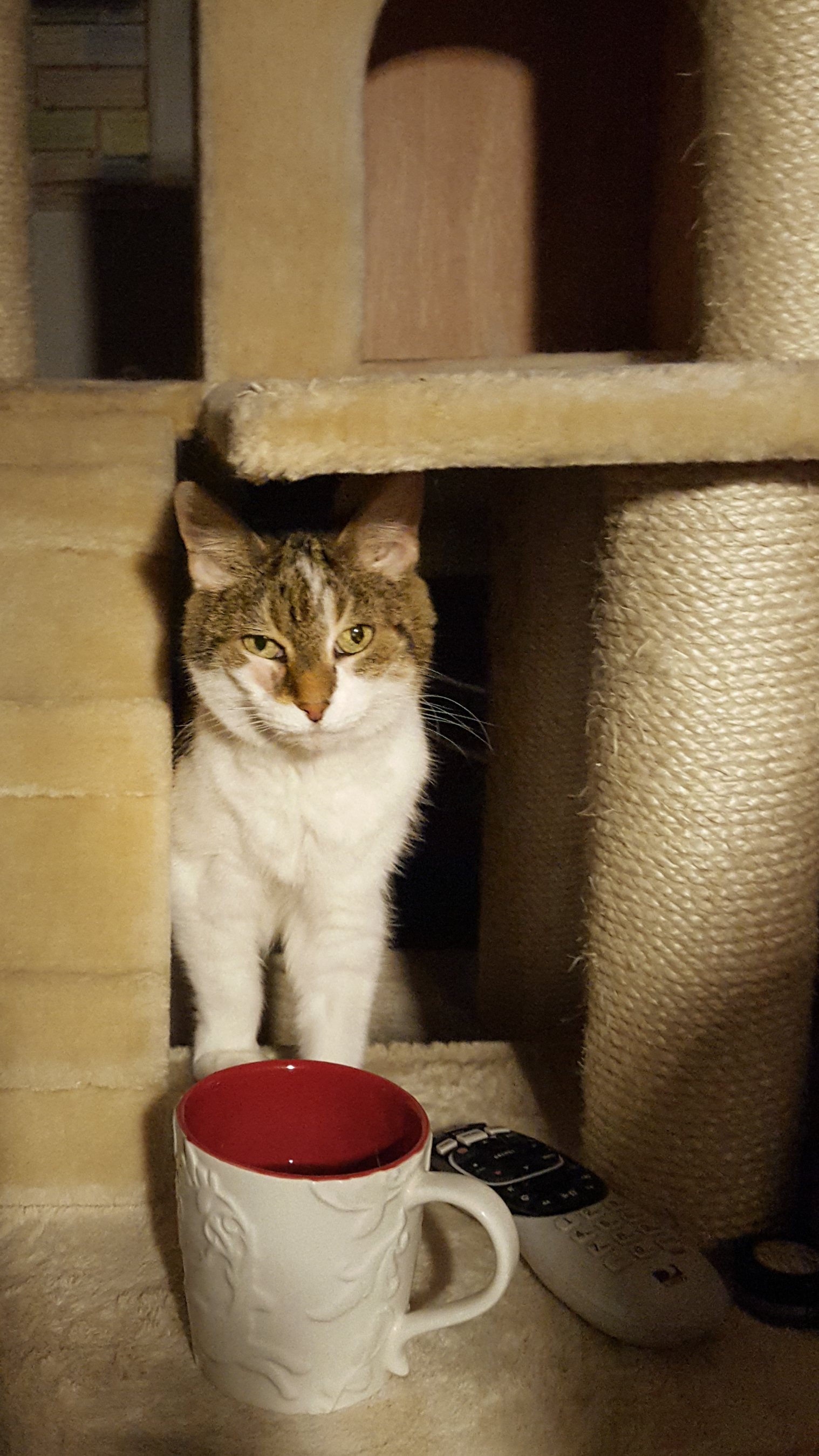 Cowboy is the oldest cat in the group, in her senior years now. She’s also the smallest, weighing in at a little over five pounds.

Note that all five cats are no longer in the same household. But, for a period of time during my transition from working a job overseas to moving back home and starting my writing business, all of us were together. And the dynamic of the five-cat interactions left an impression on me and helped to inspire this book.

Now, don’t let her name confuse you… she is, in fact, a girl, despite the name “Cowboy.” That was just a fun name she received from my brother when she was first adopted. And, you get used to it over time.

Here’s what else to know about her…

Her space is sacred

As the group elder, she doesn’t always get the respect she deserves from the other cats. But she’s always clear on letting them know that her territory is HER territory.

Specifically, she’s very protective of my mom, and of subsequently of the master bedroom in my parents’ house. If another cat tries to go into the room, she’s not having it. She’ll growl and whine, and generally protest against her space being invaded.

She is totally and completely dedicated to her person

To say that Cowboy is totally dedicated to my mom would be an understatement. She’s basically attached to my mom’s hip. And really, it’s sweet the way she loves her person so fully.

Even though she usually won’t give the time of day to other humans or other cats… when it comes to how she treats my mom, you’ll never find a more loyal companion than her. Her person is her whole world.

She still knows how to have fun

Even though she usually gets upset when one of the other cats enters “her” room… she will occasionally forget herself and run like a kitten again, chasing the other cats and letting them chase her. She’ll even groom them.

Plus, she loves her toys, especially anything with feathers on it. She’ll chase those for a while.

And finally, she’s got a bit of a catnip addiction. She loves her catnip toys, but also loves anything mint scented, whether that’s tea, ointment, or anything else. When I stayed at the house, she would venture all the way across the hall and over to my room when she smelled mint tea (hence the picture above, and yes, I did use the cat tower as my nightstand).

Making Cowboy into a Wondercat

She’s grumpy, and doesn’t like her space invaded - and I kind of relate to that. I’m a bit of a loner, too, so I don’t judge her too much for her preference.

But in the book, her character — named “Mini” due to her small size — will learn to open up a bit in terms of sharing her space, accepting a new routine, and making new friends.

Plus, Mini will be the group’s unofficial matriarch, the one who’s spent the most time on the streets, and the wisest in some ways due to her age. But, she’s overly cautious and sometimes fearful because of her life experiences.

And even though her warnings have the primary goal of self-preservation… it turns out her advice about the “outside” world isn’t entirely wrong, and the other cats would do well to heed that advice. After all, there are cars, coyotes, and dangerous criminals out there.

Mini will learn to help her friends out of sticky situations, and to accept help in return.