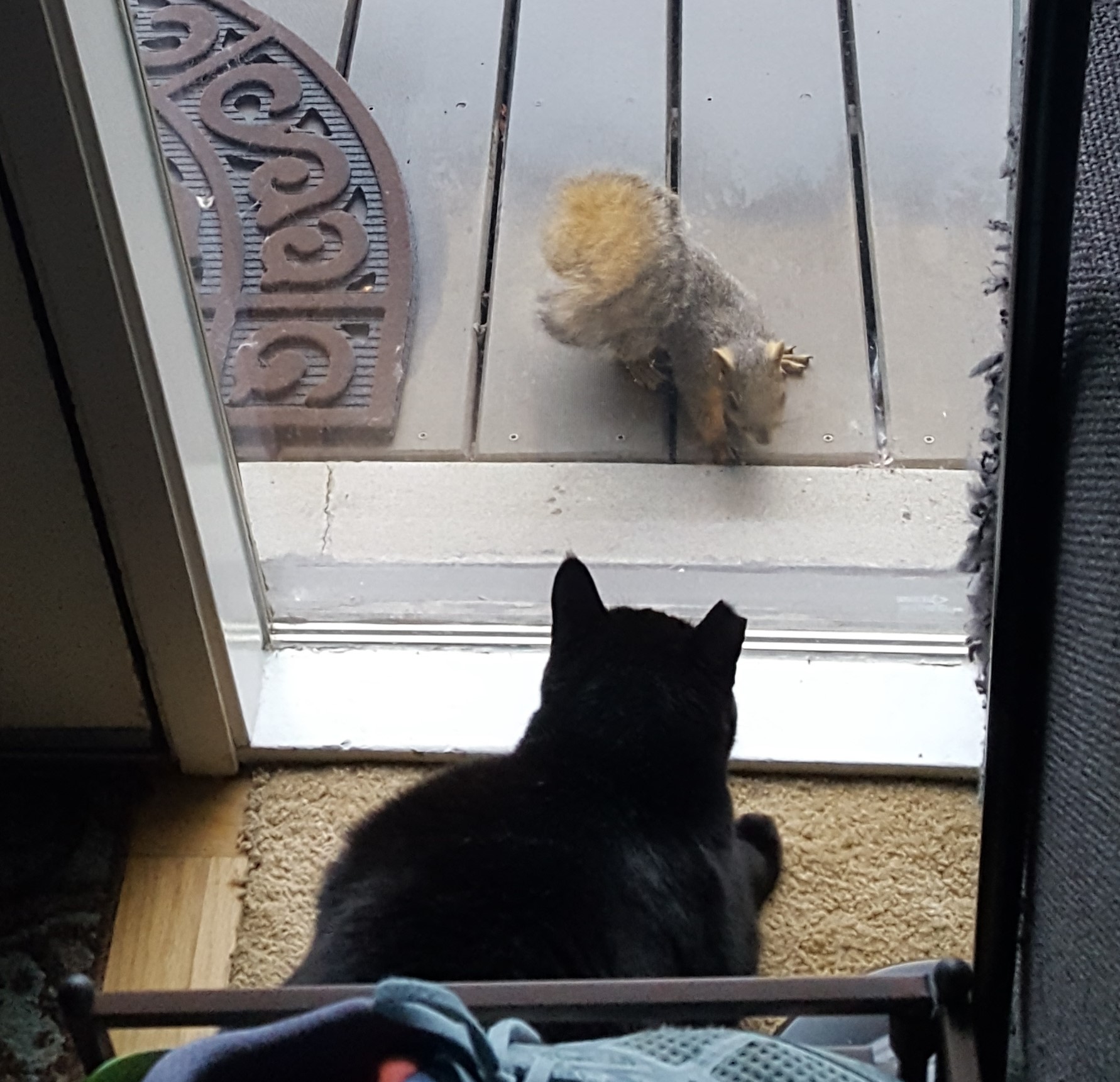 Little Girl is the most “cat-like” of our family’s cats. By that I mean, she has the most stereotypical cat behavior.

She’s aloof. She suddenly switches gears between cuddly and attacking your hand. And, she’s the one who will occasionally catch a small rodent, being an excellent hunter even through the barrier of chicken wire around the enclosed catio. As you can see, in the picture she’s totally captivated by a squirrel that likes to visit the front porch.

Little Girl has a crooked tail. She came that way from the rescue place. This happens occasionally with dogs and cats. Sometimes it’s an injury to the tail during birth, and other times the injury occurs during kittenhood. Either way, once it’s healed, a twisty or crooked tail typically doesn’t cause a pet any discomfort, and it’s still fully functional—it just looks funny.

We’ll never know exactly what Little Girl did to end up with a tail that’s bent in a couple of places. But, it only adds to her charm. Instead of a long tail that swishes behind her, her tail curves up to lie directly on top of her back, almost more like a pug’s tail than like a cat.

Her love of cabinets

Little Girl loves to open cabinets and hide inside. So much so, that my family actually placed a bowl of food for her inside of one of the kitchen cabinets. It makes her feel like she’s getting a special treat, one the other cats can’t access.

Some days, Little Girl stays isolated in the basement. Other days, she’s at the center of the group of cats, following everything they do, and seeking attention and petting from humans.

Often, she’s somewhere in between—on the outskirts and watching the group, waiting for a good moment to pounce on Holly or June, and initiate a game of chase.

Making Little Girl into a Wondercat

Little Girl is the inspiration for Pixie, the shy scaredy-cat who stays in the basement, and who physically resembles the real-life Little Girl.

Though they share some personality traits, especially the aloofness, Pixie is more on the shy and fearful side. Her character has her reasons to be that way, but a group adventure may be the thing to finally help her come out of her shell and feel like part of the family.