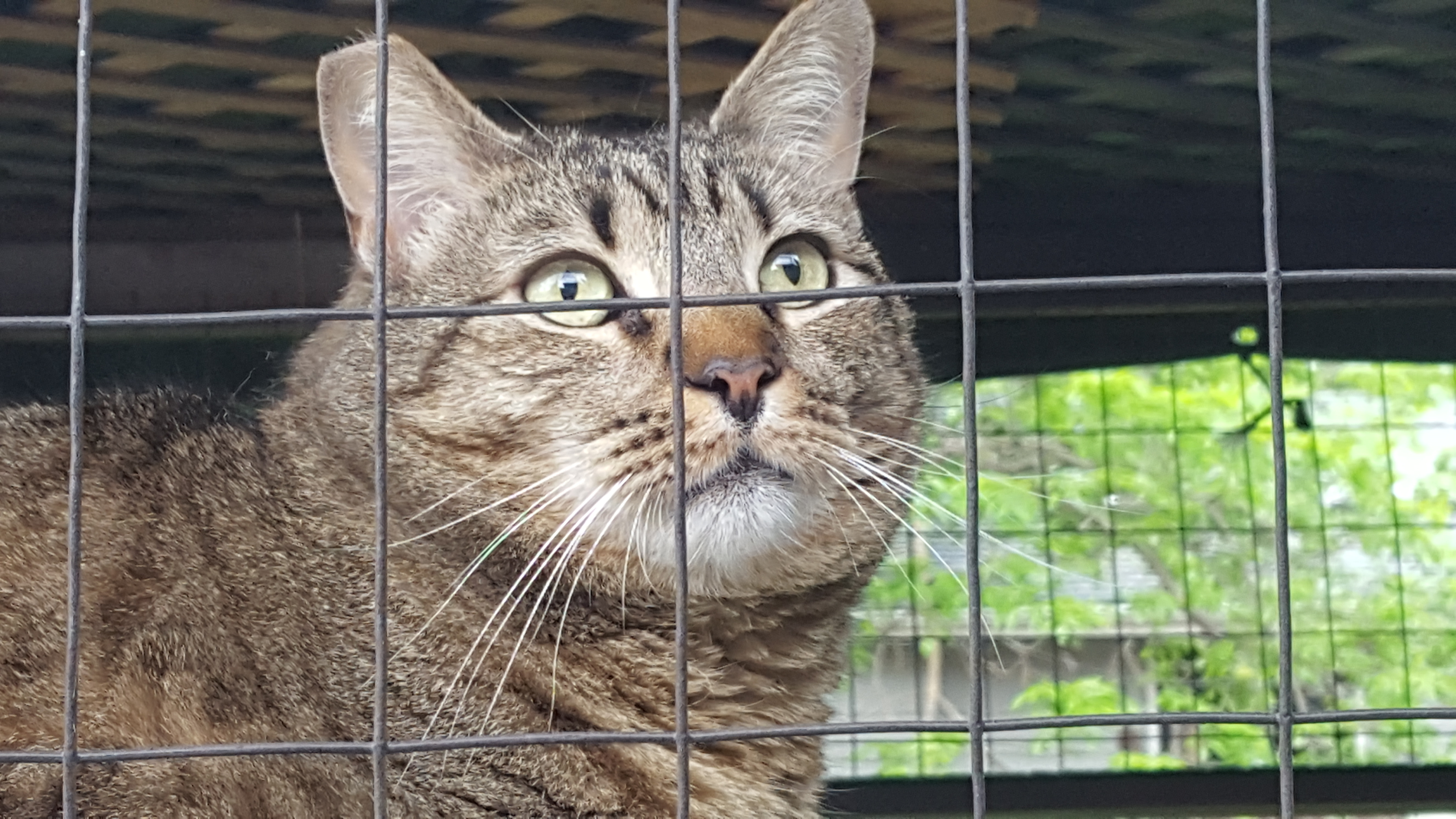 OK, so I realize that some of my family’s cats have misleading gender names… We have a female “Cowboy,” and a male “June.”

But in this case, June is short for Junior. Over time, it just became easier to go with his nickname. And, it seemed to suit him.

He was named Junior because when he was originally adopted, he had an older housemate. Since he was younger, he was called “Junior.”

And don't worry — he's not 'behind bars' in the picture above. He's actually soaking up some sun in the enclosed catio (a way to let the cats have some time outside, safely).

As it turns out, the other cat back then was rambunctious and a little bit of a bully. Not that the other cat was mean-spirited… but, they had a ton of energy, and June sometimes received the brunt of their demands to play.

Since this cat was June’s ‘mentor’ in a way… unfortunately, June picked up some bad habits, too…

He’s certainly developed into a very sweet cat. He’s probably the most social one in the bunch. He’s obsessed with people, and with other cats. He likes to be in the center of activity in the house. And, he loves to sit on the back of the couch and groom people’s hair.

However, like his mentor, he often plays too rough. Especially with Holly, who’s about half his weight. He means well, but sometimes he doesn’t realize his own strength.

If Holly (or one of the other cats) sends him a clear signal to stop — with hunched posture, ears flattened back, and even a growl — he totally ignores it. It looks like he’s totally oblivious to their cat language, the poor guy.

Nevertheless, Holly has taken a liking to him, too. He is a good cat, after all. They play a lot, and are often found cuddled up together for their cat naps.

One thing to know about June is, he loves to eat!

Unfortunately, he did have a weight problem for quite a while because of it. He was over 20 pounds — and although he is a cat with a naturally large bone structure, that was too heavy even for him.

Fortunately he’s in a safer weight range now, but it took a community effort to make it happen. June is an expert at getting into the other cats’ food…

If their food is on a countertop he can’t jump to from the floor… he’ll complete a series of complex steps to jump onto a chair, then onto the opposing countertop. Then, he’ll take the items we put at the edge of the counter (in an attempt to keep him from jumping over the gap between the counters), and push all of the items onto the floor. Then, he’ll make the jump!

We’ve tried boxes that are too small for him to get into… hiding food inside of cabinets (because our cat Little Girl likes to go inside of cabinets)… and various other places. But, June always manages to foil our plans and get into everyone else’s food.

Besides that, June also has a love of play. And, some of his favorite toys are things he can lay on that make noise. Things like crinkly plastic bags, or crunchy packing papers.

Making June into a Wondercat

June’s character, Gus, retains some of his most notable qualities…

He’s crazy about food… He likes to stay in the living room, where all the action happens… And, he’s very friendly.

But Gus will also have a bit of a philosophical nature. He’s interested in cat mythology. And, he may have a habit of singing.

Gus has a lot of redeeming qualities, as he’s a natural leader, and very friendly to everyone. But, he’ll need to learn to control his selfish side — and to stop trying to steal the other cats’ breakfasts!