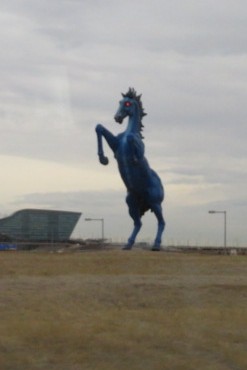 The first time I went to visit family in the Denver area, I was intrigued by the myths and legends of the Denver International Airport.

From the glowing red eyes of the supposedly possessed Blue Mustang sculpture, to the controversial art murals, there's no denying that Denver's airport is quirky.

Now that I live Boulder and write fantasy novels, I thought it might be fun to include some of those legends in my book. However, when I started to do more research on the subject, I had no idea what a can of worms was there to be opened.

We’re talking full blown conspiracy theories, ranging from the Illuminati, to human-reptile crossbreeds that live in a secret underground city, to the unfortunate idea that the airport is actually a secret headquarters for a genocidal New World Order organization.

I don’t buy into any of these conspiracy theories– frankly, a lot of them don’t make sense and are easily disproved. However, it was, in a weird way, fascinating to read about, and I’ll never look at my transit through DIA in the same way again.

And besides the conspiracy theories, there are also legends of weird and possibly haunted objects. The most infamous, of course, is Blucifer.

"Blucifer" is the nickname that's been bestowed upon the 32-foot Blue Mustang sculpture that stands guard on the road a short distance from the main entrance of the airport.

So why is this mustang so famous?

For starters, there’s no denying that the appearance of the statue can easily strike fear into a person’s heart.

The giant horse has glowing red eyes. According to the history of the sculpture, these were meant to act as a tribute to the creator, who had done significant work in the neon sign industry.

However, the bright red eyes, which you can spot from a good distance away when it’s dark outside, kind of give the impression of a horse possessed by a demon. The people involved in the construction admit that “hindsight is 20:20” and that maybe they should have picked another color…

The horse is also a bit overly realistic, down to the sculpted veins that elevate away from the muscles and the emaciated rib cage.

And then there's the most eerie… and tragic… part of this statue’s story. The unfortunate truth is that the statue killed its creator.

Luis Jimenez, the sculptor and designer, was killed when a large part of the statue fell and landed on his leg, severing the femoral artery…

This story is quite sad… I hate to imagine a life being cut short under such tragic circumstances… but, for better or worse, that man’s life has become tied to the legend of his sculpture.

When the Blue Mustang (it’s formal name) was installed, it was very controversial– a lot of Denver residents didn’t like the appearance of the beast, and wanted it to be removed. However, despite these objections, the sculpture remains, and now it’s an iconic symbol that has become part of the city.

The statue’s appearance was meant to capture the ‘spirit of the old Wild West’... so whether you like the horse or not, I'm sure you'll agree... mission accomplished.